This is not the work of gravity... 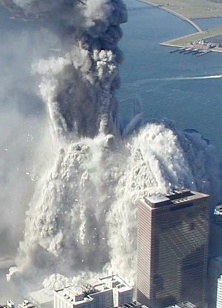 
This is not the work of gravity...


As best we can tell, there are four main kinds of people who still don't get it: Those who've never really thought about it, those who are more than a bit physics-challenged and still do not understand that the energy required to so thoroughly destroy the towers should have subtracted significantly from what gravity's acceleration had to give, those whose minds are warped and whose thinking is permanently flat-earthed by all the shock and awe and immersive propaganda and widespread social acceptance of the huge psy-op, and those who are outspoken outright government disinformation agents, who would have you believe that if we just changed the observed, recorded, and admitted-to 10 second South Tower collapse duration to 15 seconds, or maybe somehow stretched it to 17, everything would be OK, and we all could go on believing the government's ludicrous impossible "pancake collapse theory" explanation, upon which a large portion of its conspiracy theory of 9/11 is based.

Sadly, nothing could be further from the truth. (Nevermind that that scenario would require an honest government to admit that the "10 seconds" statement on page 305 of its 9-11 Commission Report was in error, which has not occurred. But that is understandable: the government is no more interested in getting people to consider this big-lie-breaking evidence than were PBS/NOVA and PM and SA or Purdue University...)

Perhaps, if you're still trying to decide if this really is a no-brainer or matter of opinion to which everyone is entitled, it is only because of the absurdity of the whole question -- how can we relate, never mind equate, air resistance to steel resistance? -- in the first place.

Fortunately, our old friend Galileo showed us how to bridge that gap.

See, Galileo didn't have modern timing devices available to him. In order to get gravity to reveal its secrets to him, Galileo slowed it down, by permitting rolling objects to "fall" along an inclined plane. By letting things thus fall at an angle to vertical, gravity's effect became easier to observe, and the concept easier to grasp. Galileo was relying upon a continuity in how gravity's vertical effect varied at varying angles to vertical, and that any increase or decrease in gravity's effect with change of angle would be continuous and thus a representative progression (of compromises) between all (vertical) and none (horizontal).

So let's do a little thought experiment and consider a compromise in resistance between air (a gas) and steel and concrete (rather hard solids). Let's consider water (a liquid), and think about how much energy-sapping impedance to motion it offers. Because, like air, water is fluid, which means it can be rearranged without requiring (consuming!) vast amounts of energy breaking molecular bonds, which is, after all, what makes a solid solid.

There are a few obvious ways to do this. Just ask yourself, how fast can you walk through water? Another is, if you have the space available right now, to stand up and swing your arms quickly so that they meet in front of you and behind your back. See how fast you can do this. Feel the breeze between your fingers, and then try to imagine doing it that fast through water. Obviously you could not do it as fast in water as in air. Now consider doing it through styrofoam or foam rubber, or through ice, or through concrete or steel. Or think about how a bullet fired from a gun will go a long way through air, but how it is seriously deformed and stopped or at least significantly slowed as soon as it hits something, including water.

Another way is to imagine dropping a bowling ball from the height of the WTC. We know it would hit the ground in 9.2 seconds in a vacuum. And that it would take over 10 seconds through air. But how long would it take through water? 30 seconds? A minute? Surely more than 17 seconds! And how long would it take through styrofoam? Or rubber? Or wood? Or ice? Or concrete and steel?

As you can probably visualize, fudging the numbers by a handful of seconds does not come even close to allowing a fall as rapid as was observed to have occurred non-destructively through WATER, let alone a hugely destructive collapse through supposedly-undamaged structurally-sound lower floors below the original damage. Gravity simply is nowhere near powerful enough to satisfy the government explanation for what we observed.

The extraordinary evidence left behind at aptly-named Ground Zero indicates that energies far in excess of what could have been provided by even a great amount of conventional explosives were involved in the destruction -- above and beyond the "collapses" -- of the WTC buildings. If you insist upon clinging to the notion that all the concrete and glass and other contents of the towers were merely "pulverized", you should consider that 1)there is no known viable "pulverization" mechanism which can account for such vast thorough destruction on such a grand and tiny scale so rapidly, and 2)even if there were, that would still, according to the official "pancake theory", have consumed a huge amount of gravity's potential energy (and then some!), which, in a gravity-driven collapse, would have meant probably no fall at all, but certainly nothing more rapid than a fall at nowhere near free-fall speeds, which is just what a parachute can accomplish with only air to do work against.

And as much as it pains us to say this, if you STILL don't get it, if you still cannot fathom the extent to which we have all been lied to by our own government, then you and your children might not deserve to get our stolen Constitution back. And if you don't get it back, that means we've all lost it, probably forever.